What Does The Research Say About The Composition & Function of the Upper Traps?

The purpose of this article is to clear up some recent claims made about traps in regards to their composition and function.  Especially the claim that “traps are not the primary muscles used for shrugs” (paraphrase).

This will be heavily referencing the studies used in the claims to clarify what was and was not found or stated in them.  If you’d just like to skip to the conclusions and training recommendations, head directly to Part 3 linked at the bottom. 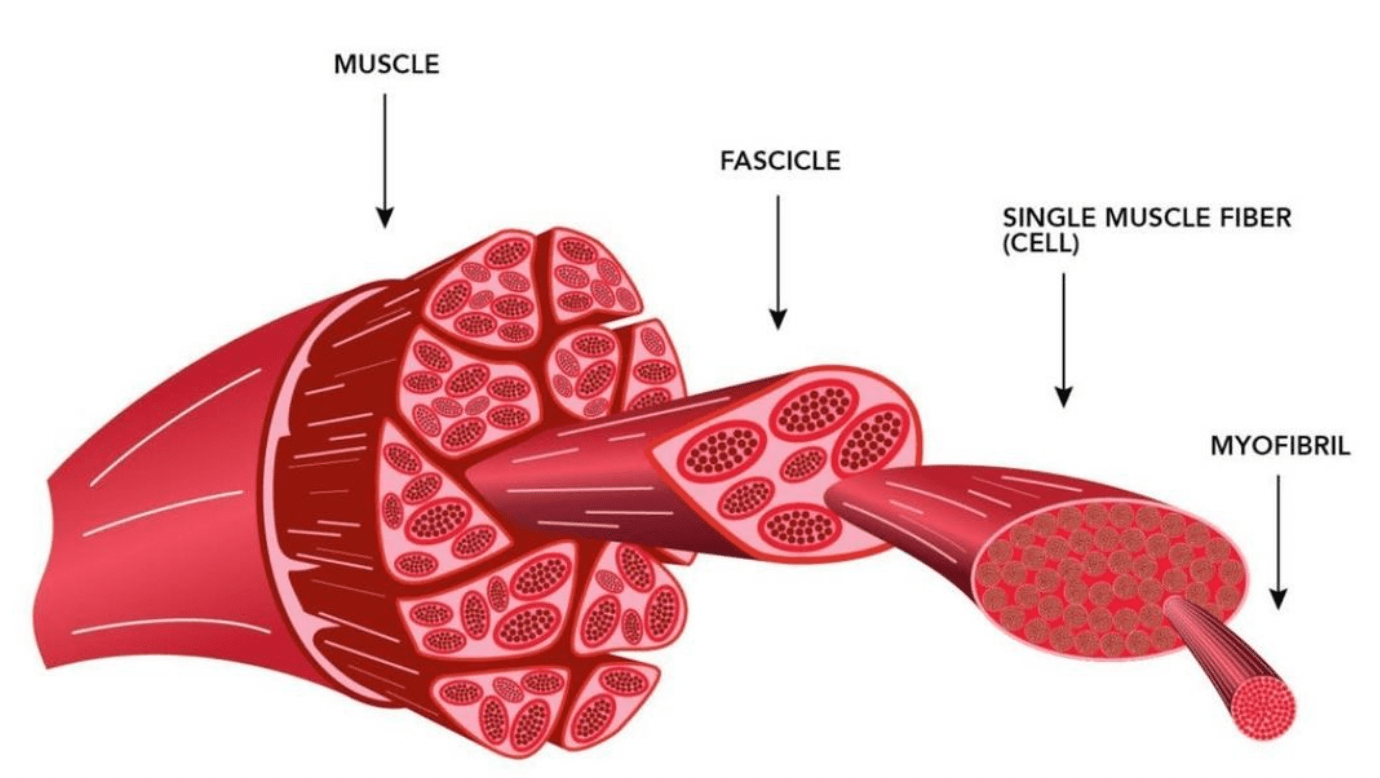 The Johnson study revealed the “fascicular anatomy of the trapezius.”  They did not measure single fiber size or fiber type.  In fact, the word “type” doesn’t even show up when I search the article.  Fascicles are bundles of many muscle fibers, a very simple but important distinction.

When we are talking about shrugs this is very relevant because the SNL fibers represent a different subdivision of the upper traps that function to stabilize the head, whereas the fibers between the occiput and C6 (nuchal ligament) are the ones that would function more to medially rotate the clavicle (shrug).  The largest single fascicle was measured at C7 (top of the middle trap) but on average the C7 fascicles were slightly smaller in this study. 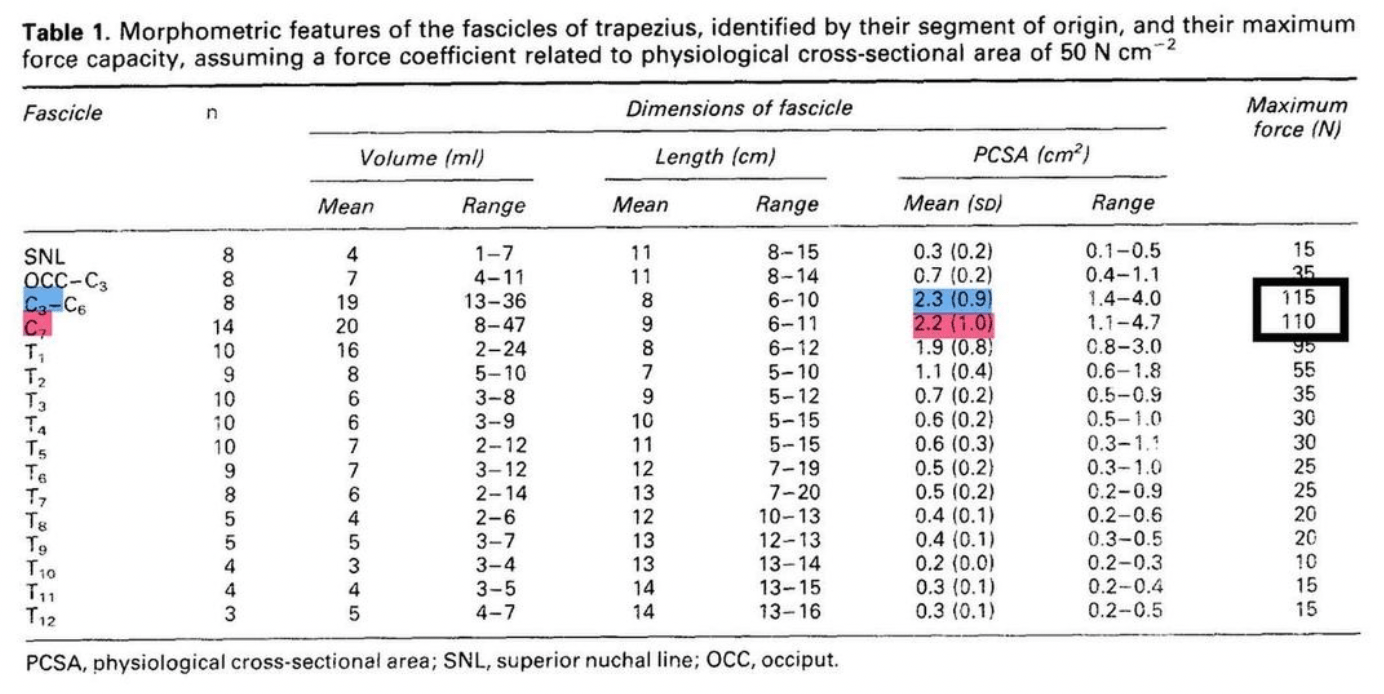 “The middle and upper trapezius are similar in size, with the upper trapezius being slightly smaller and occupying 23% of the total volume of the muscle, while the middle trapezius occupies 28%.” – Chris Beardsley

The 1994 Johnson study also did not measure fiber type, so claiming they found anything regarding type is just a flat out lie.  However, Lindman et al reported that the clavicular portion of the upper trap which includes that C3-C6 section actually had the lowest percentage of type I fibers in the trapezius.  Which is the exact opposite of what was being claimed in a recent online video (IYKYK)

*corrected Beardsleys typo to IIB, to reflect the study results

Furthermore, muscle fiber type does not infer a stability function over a power or prime mover function.  A larger muscle with more type I fibers can still produce a lot of force and power, but will be more resistant to fatigue in exchange for size:  power ratio.  I will again reference Chris Beardsley via his infographic on muscle fiber types.  The entire bottom half of this chart is type I dominant and none of those muscles would be considered to just be a stabilizer.  Glute max, vastus medialis, delt, soleus, etc. 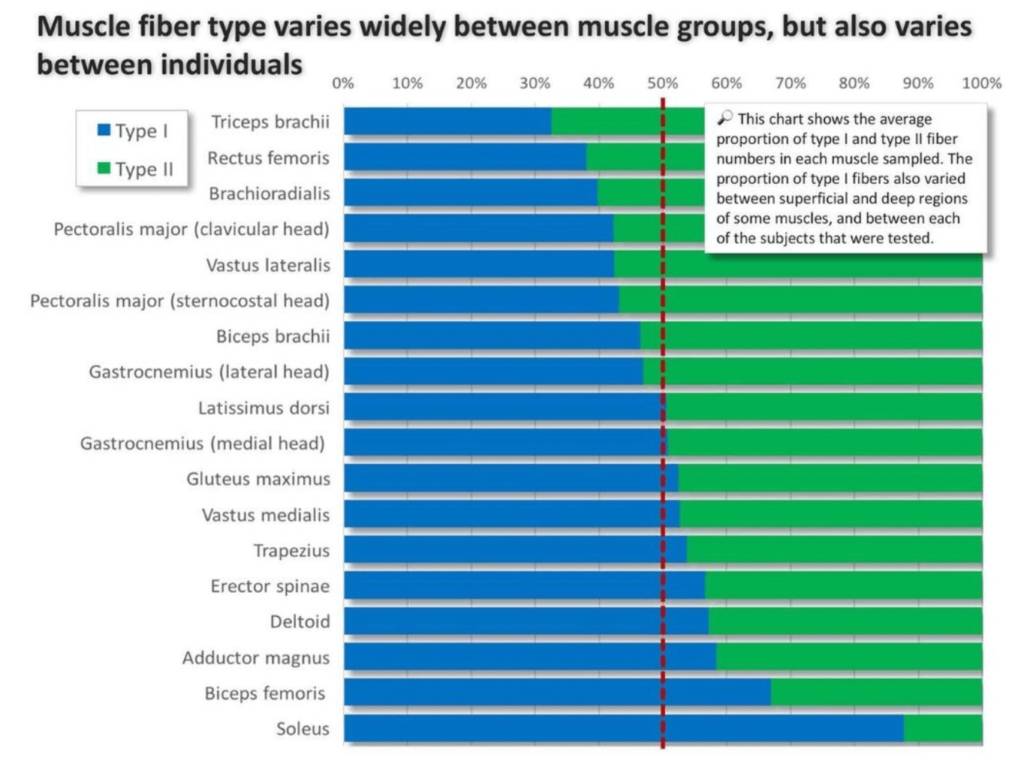 The upper traps also do not run purely horizontal.  The degrees are right there on the figure (18 to 80 degrees) but this is again a pointless statement because it’s not how the muscle is orientated with horizontal or vertical, but rather its relationship to the joint axis, which is the sternoclavicular joint.  So even if the fibers ran “purely horizontal” they would still have a moment to shrug (aka medial rotation of the clavicle). 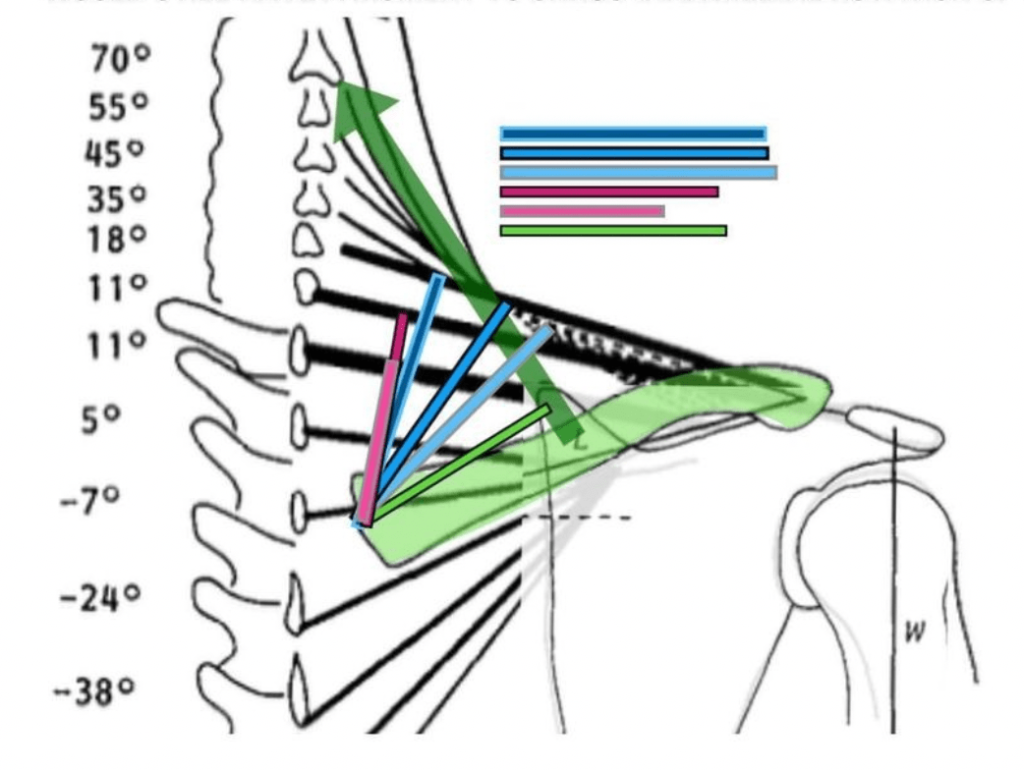 The upper traps do have leverage to shrug the shoulder.  Using the depictions of the trap fascicles and the model of medial rotation from the Johnson study, I have depicted estimated medial rotation moment arms for the lower half of the upper traps, middle traps, and levator scapulae. 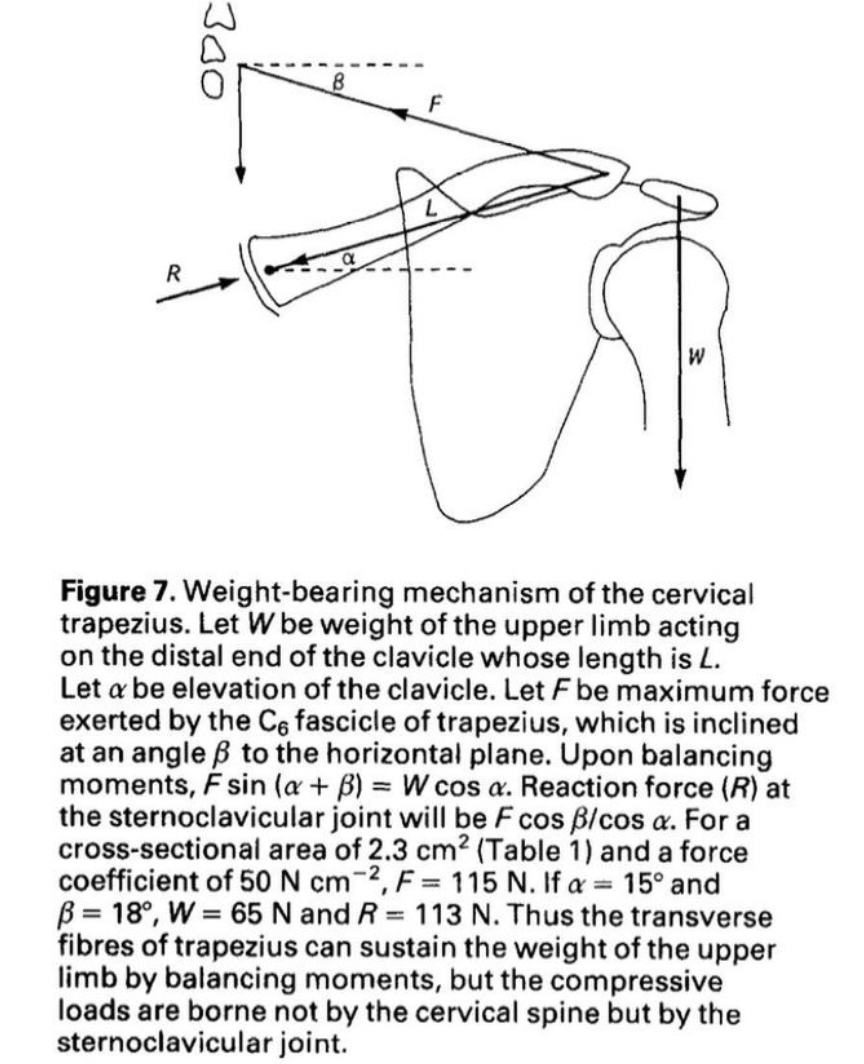 It has been claimed that the upper traps just stabilize the clavicle.  However, the last 2 pages of the Johnson study are dedicated to describing how the upper trap fibers from the nuchal ligament to the clavicle are able to support the weight of the upper limb without pulling upward or pulling directly on the scapula.  But rather lifting the shoulder like a drawbridge through medial rotation of the clavicle which they modeled here in figure 7.  Which is the other figure I used to depict the moment arm estimations.

The Johnson study is written very literal and specific so let me put some quotes from the study back in context so that they can be interpreted properly for those who have not read the full study.

“At no time does the trapezius exert an upward force on the scapula.“

This is true because the upper traps insert on the clavicle not the scapula, and the middle and lower traps do not pull upward on the scapula, but that doesn’t mean that their transverse force doesn’t shrug because that is accomplished through the medial rotation of the clavicle.

Again this is very literal in that they are referring to the force that the nuchal fibers are not pulling in an upward direction, but again, the way they raise the shoulder is through their transverse pull and medial rotation (figure 7) and here is their explanation of that.

Whereas this might be interpreted as indicating that the trapezius pulls the scapula upwards, it is no less consistent with the trapezius achieving elevation by exerting an upward moment on the clavicle at the cost of compression loads at the sternoclavicular joint.

“This mechanism offers two advantages. First and foremost the weight of the upper limb and any weight carried by it, is not borne by the cervical trapezius. Because of its transverse orientation the cervical trapezius balances the moments exerted by this load but the vertical force exerted by the weight is transferred to the sternoclavicular joint. Consequently, the trapezius does not need to be anchored to the cervical vertebrae, which explains why the ligamentum nuchae does not attach to the C,-C, spinous processes.”

To balance moments all that trapezius requires is an attachment site that resists lateral (not downward) displacement, and this is provided by the superficial funicular portion of the ligamentum nuchae 18.

The second advantage of this mechanism is that it avoids compressive loads exerted on the cervical spine by the upper limb. The strongest fascicles of trapezius arise from C6 and C, but are basically transverse in orientation and would contribute little compressive load to the neck.

The only compressive loads exerted by the trapezius would be those resulting from the obliquity of its uppermost fibers, but those with the greatest obliquity and hence the greatest capacity to exert compression loads happen also to be the smallest component of trapezius.

In essence, by exerting only transverse loads on the ligamentum nuchae, the cervical trapezius spares the cervical spine from compressive loads and transfers the weight of the upper limb and any loads carried by it to the sternoclavicular joint. By elucidating this mechanism we seek to stem the misrepresentation of trapezius as an elevator of the scapula and to emphasize the role of the sternoclavicular joint in sustaining downward loads applied to the upper limb.

According to the authors the relevance of the study was “this study refutes misconceptions about the actions of the trapezius and how they are conventionally depicted.  It brings to light the importance of the sternoclavicular joint.  Not the cervical spine in sustaining loads borne by the upper limb.” 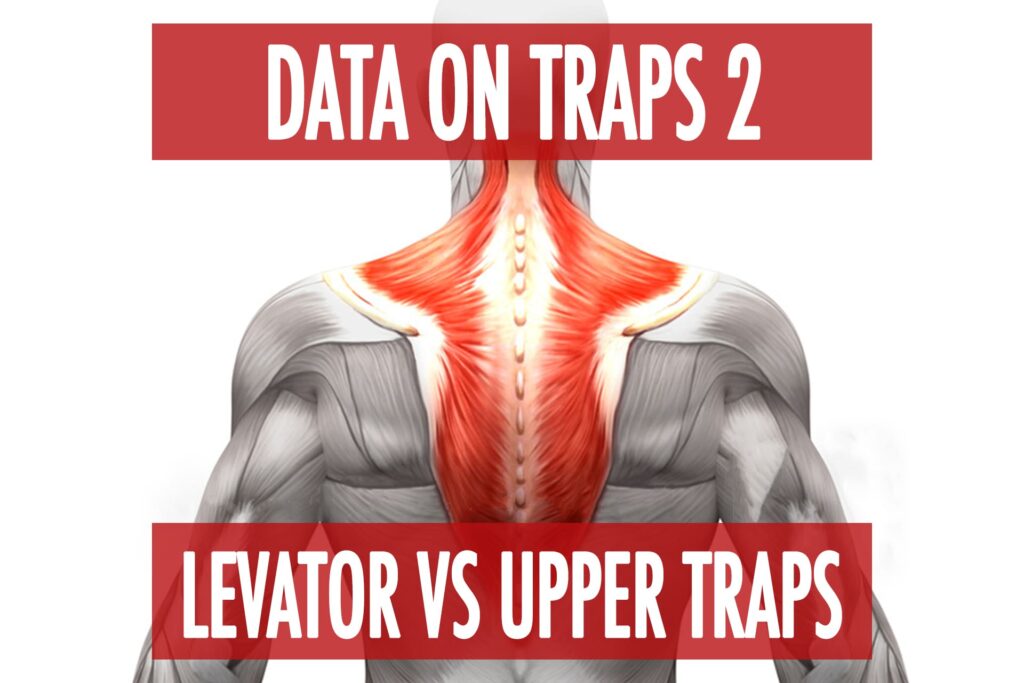 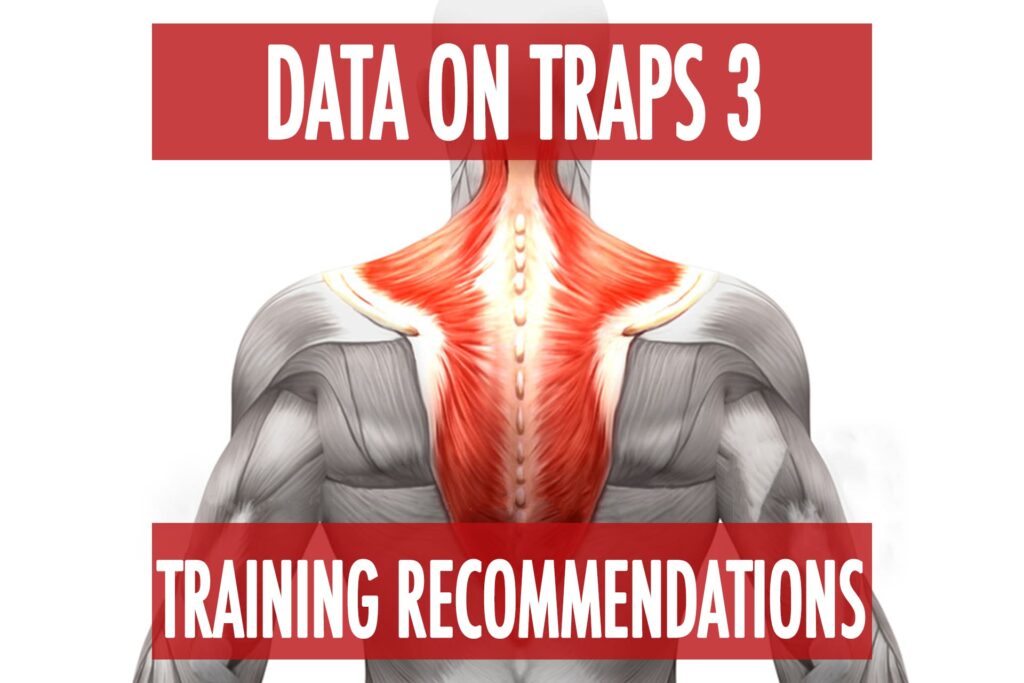 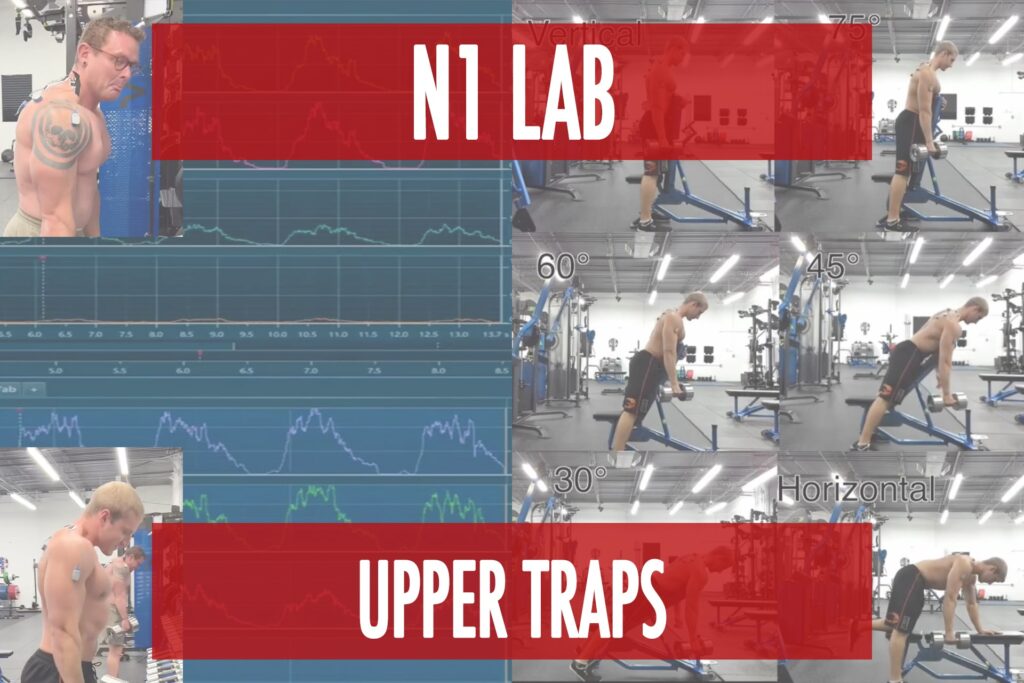